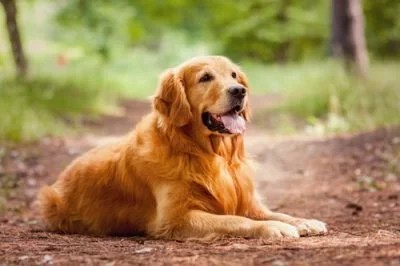 website. In the article below, I will summarize a lawsuit In which the main defense argument by the defense was that of provocation. The case went to trial in Florida in August 2017.  And the fact pattern of this case in which the defense of provocation was used was unusual. The plaintiff was not bitten by a vicious dog. Rather, she was knocked-down by a super-friendly Golden retriever.

Dogs occasionally knock-down people and depending on the kind of dog and the fragility of the person knocked down, serious injury can result. In the incident described below, the dog involved was a large, 80 pound Golden retriever and the victim was a frail, medically compromised 78-year-old lady.

The principal liability question before the jury was straightforward: did the plaintiff provoke this large golden retriever to approach her then jump on her and then knock her down?

Undisputed facts presented to the jury were as follows: The defendant-dog owner was walking Dakota on a retractable leash in a neighborhood of single-family homes located in a suburban area Jacksonville. Dakota was typical of many golden retrievers: well-tempered, friendly and equally affectionate to family members and strangers. He had been routinely walked using a retractable leash on hundreds of occasions without incident. Dakota had never jumped on a stranger in the context of being walked. On the day of the incident in question, the plaintiff was walking Dakota in the usual manner, the plaintiff, a complete stranger to the dog, approached and bent down towards Dakota and said something to the effect “oh, what a pretty dog”. She was about 4 feet away when she directed these words to Dakota. Dakota’s reaction was immediate: he quickly approached the plaintiff, raised up and placed his paws on the plaintiff’s chest, and this caused her to fall.  She sustained a separated shoulder and an injured hip.

Provocation as a defense against strict liability in Florida

Section 767.04, Florida Statutes states that: “No owner of any dog shall be liable for any damages to any person… when such person shall… carelessly provoke… the dog inflicting such damage…”   Thus, the questions before the jury were straightforward: did the plaintiff’s actions provoke Dakota to jump on her and were the actions of the plaintiff careless?

Expert opinion was given a trial about given pertaining to an animal behavior definition of provocation.  Three questions were critical to determining whether provocation occurred: (a) Did the plaintiff direct a behavior(s) to the dog? (b) If so, did the dog react immediately? (c) Did this cause the dog’s behavior to change?

The jury rendered a defense verdict.  The jury found the plaintiff 100% at fault for her injuries.  Hence, she was awarded no money.  It is noteworthy that the plaintiff did not present a viable argument to counter the defense of provocation. Instead, the plaintiff argued that the defendant was liable because he did not immediately control Dakota after he noticed Dakota approaching the plaintiff. This may have been a viable argument for the jury to consider but the judge, for reasons that are unclear, ruled that negligence by the defendant was not an issue the jury needed to consider.

Moreover, the defense verdict was based not only on the plaintiff’s provocative actions per se but also on the careless nature of her provocative actions. The jury concluded that her actions were careless given the context in which the incident occurred and because the plaintiff chose to interact with the dog knowing that she could possibly be injured.  She was careless in that she failed to ask permission to interact with Dakota before attempting to do so.   Had she done so the incident probably would not have happened.

Note the plaintiff was a 78 y.o lady with prior medical problems (neuropathy in her legs) and therefore likely medically compromised. Therefore is understandable why the jury reviewed her actions as inappropriate: She extended a social invitation to a dog she did not know. Before extending this invitation, given her age and fragile state, she should have considered the possibility that Dakota might approach or might approach her and possibly injure her by jumping on her and knocking her down (or possibly biting her) given that she had never seen this dog before. She knew nothing about Dakota’s temperament and she knew that Dakota was a large-size dog.

Florida case law is sparse with regard to provocation in dog-related injury cases. Hence, it is likely that the verdict will be appealed.