A supposedly non-aggressive, family pit bull mix named Polo, killed a 59-year-old woman in Madison Twp. Ohio in August 2014.  The daughter of the victim, owner of the dog, states that Polo got on well with the victim’s grand daughter, a two-year-old who was with the victim at the time of this fatal dog attack. 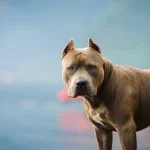 For reasons that are not clear, Polo attacked and killed 59-year-old Cindy Whisman in her backyard. The two-year-old was present time of the incident and witnessed the attack on his grandmother, but he was left untouched by the dog. Whisman started screaming for help and a neighbor called 911.  Shortly thereafter, he entered the victim’s backyard, but Whisman was already dead and he saw the dog licking the her face and with the two-year-old standing nearby. The dog inflicting multiple bites to the victim’s neck.

In the absence of direct witness accounts and lacking prior aggressive incidences by this pit bull, it becomes difficult to specify exactly what factors triggered the attack.  It was probably not a territorial reaction by the dog towards Whisman because she lived with the dog. Rather, motivationally this pitbull’s aggression is likely related to a fear-based or pain related response or possibly due to an unusual conditioning experience.  However, if the dog did not recognize the victim, then it is possible territorial motivation played a role in the incident. I have seen other serious dog attacks on people happen because of poor lighting which precluded recognition of a person the dog was very familiar with.

Nonetheless, fatal dog attacks with fact patterns similar to this incident involving pit bulls occasionally happen in that a person is killed by a family dog with no aggressive history.  The licking of the victim’s face after she was dead was unusual, however. This is affiliative-like behavior post-kill is inconsistent with the fact that the dog undoubtedly attacked moments before with aggressive intent, and suggest that when the dog first became aggressively aroused it was not familiar with the person it was attacking. The taste of the victim’s blood may have triggered the licking response, or possibly only after the victim was motionless did the dog come to recognize the victim.