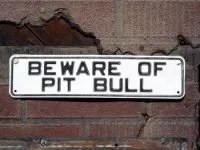 contributing to the incident in question. This makes sense from the perspective of the plaintiff. For example, one argument for the plaintiff would be that the defendant dog owner or property owner should have known about the dangerous nature of the dog in question because of the inherent aggressive tendencies of the breed to which it belonged.

However, without supporting circumstantial evidence about the dog, playing the “breed card” will probably not work.  And, in fact published case law in California states that a dog’s breed cannot be used in itself to infer a dog’s dangerous tendencies (Lunday vs. California Realty).

Findings about breed differences in aggression in dogs

Nonetheless, findings from animal behavior science have repeatedly demonstrated the strong impact breed tendencies have on canine aggression and a dog’s propensities to bite a person.  Numerous citations can be made from the animal behavior literature (for example, for an overview see Wright. J.,1991. Canine aggression toward people: bite scenarios and prevention. Vet. Clin. N. Am. 21, 299-314; Or elsewhere on this website see the review of a study entitled “Dog expert opinion on the most aggressive dog breeds“).

One relevant study reviewed below is noteworthy because it demonstrated that various types of dogs, and not specific breeds, differ in their propensities for aggression directed to an unfamiliar person. This kind of aggression that often happens when a dog encounters a stranger encroaching upon its territory.

The study carried out by Hungarian researchers was entitled “A friend or an enemy? Dogs’ reaction to an unfamiliar person showing behavioural cues of threat and friendliness” (J. Vas, et. al, Applied Animal Behaviour Science. 2005, 94, 99-115).  A question posed in the study was as follows: Would there be differences between different kinds Of dogs in terms how they reacted to an unfamiliar person who approached with hostility or with friendly behavior.

Thirty pet dogs comprising of three different types took part in the study.  All were adult, equally divided between male and female.  The experimental procedure was simple: an unfamiliar person (a young female) approached a dog in either one of two ways.  A friendly approach consisting of the stranger approaching at a normal speed and making friendly overtures such as calling the dog’s name and talking friendly to the dog, making non-threatening eye contact and gently petting the dog after reaching it.  In contrast, a threatening approach consisted of the stranger moving slowly and haltingly towards the dog, slightly bent over and looking directly into the eyes of the dog without uttering any words.

Results showed that sled dogs and retriever dogs were not prone to respond aggressively towards the approaching stranger under any of the test scenarios.  The reaction of these dogs was generally one of being friendly or tolerant. It mattered little the manner in which these dogs were approached. Likewise, overall shepherd dogs responded with friendliness when approached in a friendly manner. However, when approached in a hostile/threatening manner, shepherd dogs when compared with sled dogs and retrievers, were significantly more prone to respond with aggression and avoidance.

Results are explained in terms of the effects of domestication and selective breeding. For example, sled dogs such as malamutes and huskies were selected to work in cooperation with fellow canine pack members. Moreover, compliance to vocal commands from the human pack leader was also required.  Hence, it would have been disadvantageous for selection to be based on the presence of aggressive tendencies. Retriever dogs, such as golden and labs, were developed to locate and fetch fallen prey.  Cooperation with their human partner was an absolute necessity for this trait to develop. In contrast, many shepherd breeds were developed in part for protection; hence, emphasis during selection was placed on the dog’s ability to respond appropriately to human-based social cues (whether it be friendliness or hostility) directed to the dog.

Anecdotally, these results are consistent with what dog owners already know.  For example, a cliché of many retriever owners is that their dog would “lick a burglar to death”.  Generally retriever type dogs are usually not the subjects of dog bite lawsuits.  Rather, more often shepherd dogs are involved (i.e. the German Shepherd biting a visitor to the home).  Generally, if a retriever dog bites an unfamiliar person entering its home environment then the dog bite attorney has to determine if the stranger provoked the dog in some matter.