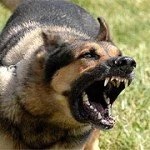 involving attacks on humans. Questions about liability need to be examined from the perspective of animal behavior science using analysis that considers factors known to have a strong causal influence on the display of human-directed aggression in companion dogs.  In dog bite lawsuits, human directed aggression commonly happens to unfamiliar people approaching the dog’s territory. In the animal behavior literature, this kind of aggression has been characterized as protective or territorial aggression.

Causal factors influencing human directed aggression in dogs may be grouped into four broad categories: hormones, environmental influences, learning, and genetics. Factors from these four categories do not act in isolation from each other. Instead, these factors work together interactively, instead of in an additive fashion.

Androgens, the collective name for the principal male hormone that includes testosterone, usually has a marked facilitative effect on the expression on canine human directed aggression . In contrast, progestins, the collective name for the principal female hormone, which includes estrogen, frequently has a significant inhibitory effect.  Human directed aggression usually first appears in male dogs between approximately 9 and 16 months of age.  Hence, the age of onset for this type of aggression correlates well with sexual maturity.

The practical implications of this are clear: Castration frequently lessens  human directed aggression, particularly to those most familiar with a dog. In addition, medication with tricyclic antidepressants, or drugs like prozac, may also act to suppress a dog’s aggressive tendencies, but again the results vary depending on the past experience of the individual dog, and a host of other factors. In dog bite lawsuits, the attorney needs to question the defendant dog owner about the reproductive status of the dog involved and whether the dog was taking medication.  The foreseeability of the dog attacking a human becomes greater if a male dog is not neutered and if it was on certain kinds of medication.

The feedback a dog receives from an owner is of critical importance in determining the likelihood of  a dog displaying human directed aggression. Styles of feedback from the owner very tremendously. On one hand, there is the owner who seriously tries to discourage aggression by applying punishment (punishment  must be applied in a judicious matter to avoid serious side effects), and this contrasts markedly with the owner who permits aggressive displays to go unattended (e.g. the over permissive owner).  In dog bite lawsuits, attorneys need to discover the kind of  interaction style the defendant dog owner had with the dog, and if punishment training techniques were used.

Obedience training and socialization the dog has received, are other kinds of environmental influences that significantly affect the tendency to display human directed aggression. The dog bite attorney needs to question the defendant dog owner about  the dog’s socialization and training experiences, and have the dog aggression expert determined what influences these factors might have had on the foreseeability of aggression in a dog.

Aggression in itself, especially if it’s successful, is often self-reinforcing to a dog. That is, after several successful aggressive encounters,  many dogs become increasingly motivated direct aggression to a human in a given set of circumstances. The principle of self-reinforcement for aggressive responding was first demonstrated in laboratory rodents many years ago, and subsequently it has been shown to occur in a wide variety of both vertebrate species.   This  principle may be used in dog bite lawsuits when a claim for punitive damages  is made.  For example, prior to the dog bite incident that forms the basis of a lawsuit, this principle could be used to explain to a jury why it was likely that the dog had previously displayed  aggression to humans.  This may be helpful if the defendant dog owner denies any previous aggressive history by the dog.

Behaviors, like the physical features of a dog, such as its coat color are always affected by hereditary influences.  Human directed aggression is no exception. Certain breeds are more prone to display  aggression to humans when compared with other breeds. It would be foolish to dismiss this fact and assert, for example, that German shepherds or Chows are generally less  aggressive to humans, particularly in a territorial sense. German shepherds and Chows are what they are because of many years of selective breeding for particular behavioral tendencies. However, dog bite attorneys, perhaps  after receiving input  from the dog aggression expert, usually come to realize that a dog’s breed in itself is not sufficient evidence to put an owner on notice about the dog’s aggressive tendencies.  The breed of the dog along with other factors,  some noted above in this short article, need to be considered in determining the foreseeability of aggressive responding in a dog.