Dr. Polsky was retained as an animal behavior expert for the plaintiff. One 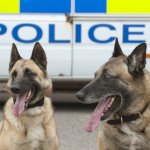 issue in this case was whether the victim, a 60 year-old male recently released psychiatric patient, who may have been in a florid paranoid state at the time of the incident, had the ability to thrust his arm forward in stabbing motions towards the police officer before being shot to death. The victim had a pair of 8″ scissors in his hand, and according to the canine handler, the victim was thrusting his arm forward in an effort to stab his dog. Dr. Polsky testified as to whether the victim could act in such a manner given the fact that the police dog was latched onto his upper arm. Plaintiffs’ attorney argued that the use of gunshot was therefore grossly excessive considering the circumstances, and that the victim was shot because he posed more of a threat to the dog (i.e.stabbing the dog with a sissors) than to the police officers.

At trial, Polsky also testified about the strong attachment that forms between police handlers and their service dogs (hence a reson to protect their dog from harm), bite force in dogs, and the role in which police service dogs might best be used. A defense verdict was rendered. There was no recovery for the plaintiff.