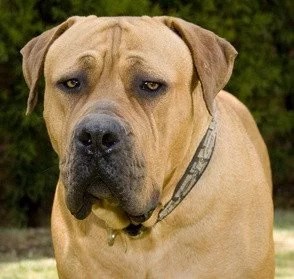 The boerboel is a large, working type mastiff dog, (weights up to 175 lbs) originally developed in South Africa, and although it continues to be most prevalent in South Africa, breeding programs now exists in other European countries and in the United States. The dog was originally bred for guarding and protection. A 60 y.o. South Africian lady was killed by a boerboel in January, 2010.