A basic finding him in the epidemiology of dog bites is that children are the victims in a disproportional  amount of dog bite attacks. The reasons for 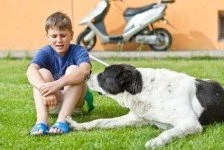 this are probably the result of many interacting variables, some of which include the inability of the child to defend itself against an aggressive dog, the inability of a child to accurately read nonverbal communication signals from a dog, the style of interaction a child directs to a dog, natural movements and size of the child which at times might resemble a prey like object to a dog, the contextual features in which a child encounters a dog, and the interaction between a dog’s behavioral tendencies and the cognitive/developmental stage of the child. In any given instance of dog bite attack on a child, it is likely that some of the above-mentioned variables simultaneously occur at a given point in time to produce the event.