Parents with infants need to be particularly careful when leaving their child unsupervised on a swing in the presence of the family dog.  This warning comes as result of  a study published in 2006.  Children  may be attacked and killed because of predatory inclinations in dogs.  Some dogs are easily enticed into displaying predatory behavior, and instances of 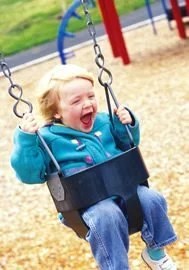 Predation towards humans, particularly if they are small, may be directed towards a  a child moving on a child swing.  Animal behaviorists know that predatory behavior by dogs directed to people is not uncommon as witnessed in other circumstances such as dogs chasing cars, motorcycles,  and kids on skateboards.  A person exercising with a “power walk” on the sidewalk  in a residential neighborhood, with arms swinging by the side, would be a potential target for predatory attack by a dog. Certain breeds such as border colies, Australian shepherds, and other breed developed for herding are naturally inclined to act in this manner. Also see  Swings associated with fatal dog attack on infant

Get to know your dog really well – dogs with predatory inclinations usually start to display such tendencies early in development.  Hence, by the time the child is ready to be placed in a swing, and owner should know whether the dog has inclination to chase moving objects.   Dogs lacking predatory tendencies are probably safe to keep around children on swings, but nonetheless not left unattended in the presence of the child. Note however, that this  characteristic is not entirely confined to herding type breeds. Instead,  a dog’s individual temperamental features need to be assessed.