The bull mastiff is a extremely large and powerful dog, and, not surprisingly given the size and  temperamental features of many dogs of this breed, the bull mastiff has a 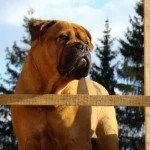 history of being involved in fatal dog attacks.  In June 2013, 150 pound a bull mastiff killed a five-year-old child in Oklahoma.

Outside the United States, there have also been fatal dog attacks  by bull mastiffs. For example, a rather tragic incident happened in Slavonia in February, 2010.  In this particular case, a 52-year-old physician had battled governmental authorities to have his three bull mastiffs returned to him, after being declared dangerous by local authorities.  Eventually the dogs were returned.  However, two weeks after the return of the dogs to the physician’s home, the dogs attacked and killed him in his backyard! It was not clear how many dogs were involved in the attack. When police officers arrived on the scene, they shot and killed one of the dogs, and the other two were euthanized.

The incident created a national controversy in Slavonia.  News of this fatality prompted calls for the resignation of the Agricultural minister for allowing the dogs to be returned to the victim.