A 32-year-old pregnant Pacifica, California woman was mauled to death by a family pit bull on August 11, 2011. At the time of the incident she was alone 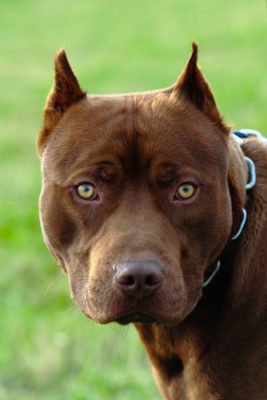 in her home and was discovered by her husband when he returned later that day Pacifica is a small town near San Francisco.

The victim suffered bites to her face, hands, neck and arms, and died from blood loss in shock. Her unborn infant also died in the incident. The dog in question, named Gunnar, was a 125 pound, two-year-old reproductively intact male. According to husband, upon returning, he saw the dog standing over his wife’s body, and then the dog drug the body into another part of the house. The husband tried to confine the dog in a back room, but the dog escaped, and when police arrived they shot and killed Gunner in the front yard.
The husband reported that Gunnar was well trained, having no signs of previous aggression, and was good around children. The couple had recently moved into the house because they wanted a home with the backyard for Gunnar, and their other female pit bull dog. It is believed that the female was not involved in the incident, however.

Several days after the incident the husband of the victim gave forgiveness to his dog for killing his wife. In a statement published in the San Jose examiner, the husband is quoted as saying that the incident was a freak accident and that “They (their two pit bulls) are the most loving animals I have ever had in my life. Whatever happened right now was not the breeds fault. The husband was further quoted as saying “she will be buried with the dog.”

The husband and wife were staunch supporters of the pit bull breed. The victim was a longtime member of groups in the San Francisco Bay area promoting understanding of the pit bull breed, such as Bay Area Dog Lovers Responsible About Pit Bulls. This is a group that tries to convince people that pit bulls are not that dangerous.

From an animal behavior perspective, to understand the reasons for the attack, one would have to look at the the contextual features in which this dog was living, which includes detailed analysis of the nature of the dog’s relationship with the victim, her husband, and other humans the dog had previously encountered. The predatory nature of the dog also would have to be assessed, as well as its propensities for other kinds of aggressive responding. This information can be collected historically from people who were familiar with the dog. If sufficient meaningful information were collected, which includes analysis of the necropsy, then it might be possible to reconstruct the attack with some degree of scientific accuracy.