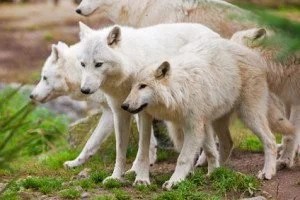 in northern Georgia in August 2009.

In the first instance, a dog pack of about a dozen individuals was roaming in a rural area. This pack of dogs encountered an elderly lady on a hike. The details of what happened after the dogs encountered the lady are not clear. However, the end result was that she was attacked and savagely mauled to death. Several hours later, her husband, a retired professor at the University of Georgia, started searching for his wife because she had not returned home.  During his search, he encountered the same pack of dogs.  And what only might be appropriate for a TV horror show about vicious dogs, he then was attacked and mauled to death!  Subsequently, the dogs were rounded up by local authorities and destroyed.

The danger of a pack of dogs vs. a group of dogs

A pack of dogs is not necessarily a group of dogs.  Individuals within a pack demonstrate a high degree of social affiliation and coordination between individuals. In addition, a dog pack is characterized by a freely moving group of individuals. These traits exemplify wolves in the wild. Moreover, this conceptualization of a dog pack does not apply to a group of confined dogs. This would include a group of dogs housed together in a kennel environment. From an animal behavior perspective, this is referred to as an “aggregate” of dogs.  It is not a social group.  An analogy would be a group of moths gathered around a light bulb.

I mentioned this to exemplify an issue that required animal behavior expertise in a dog bite lawsuit in which I took part as an animal behavior expert. In this instance, a teenage girl walked into the kennel run where a group of French mastiffs was being kept. The dogs are part of a breeding colony. Previously, the girl had been warned by her grandmother not to enter the dog run.  She disobeyed and shortly after entering the run she was severely mauled by several of the dogs.  She was lucky to survive.  At trial, plaintiff’s counsel argued that these dogs attacked because they were acting as a “pack”.  Plaintiff’s counsel’s argued that the owner of the dogs should have known about the foreseeable danger this so-called pack of dogs presented. This argument is incorrect from an animal behavior perspective, however.   At trial, it never became clear what motivated these dogs to attack the girl.

The danger roaming packs of dogs present to the public have long been known.  Studies published in the animal behavior literature have documented this danger.  For example, 25 years ago animal behavior researchers made a retrospective analysis of several dog bite fatalities initiated by packs of dogs in rural areas of the United States. One of the principal findings was that the fatalities were initiated due to the predatory tendencies of the individuals within the pack. Predatory behavior is a socially coordinated group activity.  Social facilitation of predatory behavior frequently happens.  This conclusion was supported by the findings which showed in some instances flesh was consumed from the victim.

Steps needed to protect the public from roaming packs dogs

Second, people in high-risk communities need to stop feeding groups of stray dogs (as was the case in the Georgia incident). People in high-risk communities also need to persistently file complaints about roaming packs of dogs.  When this happens, animal control is likely to take action. Why?  Animal control agencies know that they may be sued if they fail to take meaningful and quick action after receiving a complaint. Read more about dog bite prevention techniques elsewhere on this website.