Anecdotal accounts exist about household cats supposedly smothering infants to death.  To some extent these accounts may be true, although it should be carefully noted that no published accounts that appear in the animal behavior 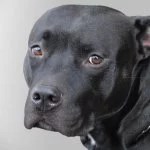 literature that substantiate these kinds of occurrences. Statistics are not readily available on the Internet, but it is possible that the Centers for Disease Control may have information on this topic.

If cats are involved in instances like this, then it is possible that this also holds for dogs but probably to a much lesser extent. I mentioned this in light of an incident where a family’s pit bull was accused of smothering a 1-month-old baby girl in Lockland, Ohio in February 2009. Investigators are uncertain about why or how long the pit bull was on top of the baby.

When the incident happened, the baby was on the living room couch and the mother was in the nearby kitchen.  After rescuers arrived, the baby was bleeding from the nose, and she was transported to the hospital where she died. Given the circumstances surrounding this tragic incident, as reported in online news reports, it is likely that the cat positioned itself  in a way that cut off the air supply of the infant. The infant  may have been sleeping, or was unable to vocalize in distress as the incident unfolded, thereby not giving the mother the opportunity to intervene.  A neighbor, Sally Clark, cried as she spoke about the child’s death. “She was born a month early, a little premature. I can’t imagine what they’re going through,” Clark said.