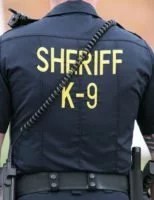 apprehension.  And in many instances, since the handler is nearby, accurate discrimination is possible: the handlers can usually direct the dog the appropriate person. Nonetheless, mistakes happen.

For example, in one lawsuit the handler attached  a 30 foot long leash to his canine partner and commanded his dog to start searching for the suspect.  A short time afterwards, while the dog was nearly fully extended on the long leash, the dog “discovered” a man sleeping underneath a nearby bush.  And without any hesitation or command from its handler the dog viciously attack the man and dragged him from underneath the bush.  The man, who later died from the attack, was not the suspect, however.  In other cases, innocent bystanders have been attacked by police dogs, and police officers themselves have been attacked by the police K-9 assisting them in suspect apprehension.

The bottom line is that police dogs used in suspect apprehension frequently make behavioral errors.  The fact of the matter is that all police dogs are subject to behavioral error when deployed in the field for subject apprehension. However, this fact may not be fully recognized by the handlers of police dogs and often it is denied altogether.   Error rates have not been scientifically investigated as they have been, for example, with police dogs trained to identify suspects through scent discrimination in police lineups.  And error rates for the latter are surprisingly high.  Results from scientific investigations indicate that they can be as high as 50%.  Hence,  evidence exists  which suggests the same may hold for  police dogs used for suspect apprehension.

The reasons for behavioral error by police dogs vary.  Errors can be attributed to the nature of the individual dog, it’s genetic background, the quality of training it has received, or the fact that most police dogs are trained to multitask.  Moreover, based on the remarks of a police dog trainer in North Carolina, one could easily conclude that behavioral errors are the result of mistakes by the handler.  According to Greenville North Carolina police dog trainer and certifier, Mike Bullock: “Cops do stupid things. Half of the police dog trainers in the state suck. Properly trained dog should always know who their intended targets are.”  It is significant to note that these remarks come from an individual who likely has first-hand knowledge about the competency of police dog handlers.

I have no doubt that police K-9 handlers are extremely dedicated to their jobs and their canine partners, but unfortunately due to their emotional attachment to their dogs they may be blinded to the fact that their dogs are prone to behavioral error.  Moreover, many handlers probably lack the breadth of knowledge in animal behavior science to effectively handle their dogs in the most optimal manner possible.  Hence competency is lacking in this regard and this impacts the handler’s ability to control the dog when deployed in the field.  Another side issue is whether breed differences exist in the propensity to make behavioral errors by police dogs.  Some police dog trainers I know of maintain that the Belgian Malinois is more reliable and less prone to behave error when compared with the German shepherd.  I know of no scientifically based evidence to support this notion, however.