Trial attorneys and experts alike know that uncertainty often exists when a dog bite case is presented to a jury. California K9 expert witness, Richard Polsky, in his work with attorneys, has  seen this happened on many occasions

Uncertainty about outcome arises, in part, because a jury may have sympathy for the plaintiff or perhaps dislike for insurance companies rather than what dog bite law dictates or objective evidence indicates about animal behavior.

I describe a lawsuit in which the above probably happened. I testified as an K9 expert at trial on issues that pertained to dog bite provocation. The defense argued that the plaintiff was comparatively at fault because she provoked the dog. There was compelling animal behavior evidence to support this belief.  In California, a strict liability state for dog bites, the amount of award for the plaintiff will be reduced if the jury believes that the plaintiff contributed to her own injuries.

Labrador retriever with no aggressive history 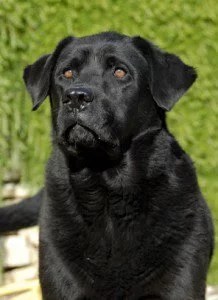 The dog in question was a seven-year-old reproductively intact male Labrador retriever named Sader.  There was no evidence to indicate that Sader had ever bitten, growled, snapped or showed hostility to any person prior to the incident.  The incident happened at a birthday party at the dog owner’s residence in July, 2012.  There were about 15 partygoers, most in their 20s.  Most were drinking, some may have been intoxicated, but this issue was not raised at trial.   Moments before the incident happened Sader was resting on the bed next to his owner in a studio type living space.  About 8-10 people had gathered in this location.  Some were playing beer pong.  There is no indication of any hostility between any person.  There was no indication that Sader was under stress or discomfort.

According to the plaintiff, an attractive lady in her 20s, she was standing close to the side of the bed.  The plaintiff testified that she leaned towards Sader in an attempt to pet him.  However, she could not complete her actions because, according to the plaintiff,  just as she started to bend Sader lunged several feet through the air and inflicted a single, serious bite to her face.  The plaintiff testified that her face was at least several feet from the face of Sader at the time of the bite.  Plaintiff’s counsel argued that the bite happened because Sader was being “protective” of its owner.

The plaintiff denied that she had food in her mouth or that she was taunting a roughhousing with the dog, however. Defense argued that it was implausible that Sader, who was resting comfortably on the bed, possessed the physical or motivational capability too suddenly lunged in a horizontally and upward  direction through several feet to bite the face of the plaintiff.  This in itself this was compelling behavioral evidence to indicate that the  plaintiff’s version was implausible and that she must have provoked Sader by taunting him with food (frustration induced aggression).

Throughout the duration of the party, up to the time of the incident, Sader was friendly towards people, frequently taking food from them.  In fact, partygoers , including the plaintiff herself, testified that prior to the incident, they engaged Sader in actions identical to those actions by the plaintiff when the incident occurred. That is by bending over him and petting him on the head!  Another credible witness, who was standing next to the plaintiff, testified that minutes before the incident happened he leaned over Sader and petted him on the head in exactly the same manner attempted by the plaintiff!  These actions by the other partygoers undermines the validity of the plaintiff’s testimony. Moreover, Sader had been in attendance at parties before in similar circumstances and there were never any instances of aggression or complaints about his behavior.   Given this fact pattern, from an animal behavior perspective, the defense firmly believed that the plaintiff must have provoked the dog.  Nonetheless, as stated above, plaintiff’s counsel argued that the incident happened because Sader was acting “protectively” of his owner.

However, from an animal behavior perspective this made no sense because the actions of the plaintiff were (1) directed to Sader (and not his owner) and (2) the nature of the plaintiff’s actions were benign rather than hostile.   The so-called animal behavior expert for the plaintiff (a dog trainer by profession who worked part-time as a car salesman) testified that the mere proximity between the dog and the owner was sufficient to conclude that Sader must have been acting protectively.

At trial, this expert even conceded that the plaintiffs actions were directed towards the dog and  the owner.  This expert also appeared to ignore the

fact that Sader had never acted protectively over its owner in the past (that is by growling, snarling, snapping, etc.).  However, in their deposition testimony, the plaintiff and her boyfriend testified that they thought Sader could become protective, but this was speculation on their part.  Nonetheless, the plaintiff used this testimony to buttress his arguments.   The jury came back with with a verdict in favor of the plaintiff.  They assigned no comparative fault by the plaintiff.  The amount of the award was not disclosed, but it was higher than what the defense offered during settlement negotiations ($40,000).

Defense counsel felt that the jury, a relatively uneducated group from a farming community in central California, “wanted to give the plaintiff some money”.  Defense counsel was told that at least several or more jurors appeared disinterested and that they ignored jury instructions. These jurors were likely biased, perhaps particularly against “deep-pocketed” insurance companies.  However, in all fairness, some jurors said that they could not render a verdict in favor of the defense because evidence was somewhat conflicting (testimony of the percipient witnesses) regarding the location of the plaintiff and the dog at the time of the incident. This had no bearing on why the incident happened or the actions of the plaintiff, however. Moreover, it appears that the jury ignored the consistency of testimony by the majority of the witnesses about the most significant facts of the case: The plaintiffs actions towards the dog, the fact that her face must have been within inches of the dog’s face and the nature of this well-tempered Labrador. Given this, I cannot escape the conclusion that the verdict was unjust and based largely on emotion and sympathy for the plaintiff rather than what is dictated by law regarding provocation in dog bite cases.