I am not writing you in regards to dog attack but for a general dog question. I am planning on rescuing a dog from the local shelter. The dog is listed as a “pit bull” and in my interactions has shown no aggression. I have known a few pit bull terriers and 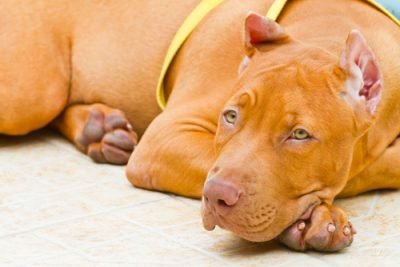 Staffordshire Terriers that were excellent well tempered dogs. However a quick Google search brings up tons of news articles about similar seemingly well-tempered dogs losing it and maiming people. I have been doing a lot of research online about the “pit bull” breeds. I am a scientifically minded person and am finding it difficult to find any helpful information on how safe they are for having as a companion animal.

The subject seems to be very polarizing and almost every website that I have found (other than yours) either tries to paint them as terribly unstable animals not fit to be kept as pets, or as sweet, loving animals who are only victims of bad owners. The real truth I imagine lies somewhere in between. The reason that I am writing you is that as an animal behavior expert who sees tons of dog bites of varying severity can you give me any insight. In your experience are bully breeds inherently dangerous to own? As most evidence either pro or anti-pit bull breed seems to be based on anecdotal evidence or correlative statistics with little or no statistical significance. Is there any meaningful data that you can point me towards, or any personal advice that you would be willing to give?

Response from Dr. Polsky
There are several important issues you have raised with regard to the nature of pit bull type dogs and I will try to briefly address them for your edification. I preface this first by saying a “pit bull” is not a breed of dog; instead, the name is only a descriptor for a dog that has the physical appearance of a Staffordshire terrier or the American pit bull terrier. Second, I agree with you wholeheartedly in that the issue about the dangerous nature of pit bull type dogs is conflictual, which leaves many owners in doubt about the potential inherent danger of these kind of dogs.

Many dog bite reports one finds online identify a pit bull as the type of dog involved in the incident, when in fact this was not the case. Accurate breed identification frequently is difficult, especially by people who do not have much familiarity with the physical appearance of different breeds. Moreover, if you regularly read news reports about dog attacks throughout the United States, you will find that 80% of the reports identify a pit bull type dog as the kind of dog responsible for the attack. One the other hand, epidemiological studies clearly show that German shepherds are probably the breed of dog that inflict most dog bites to people, but it is unusual to find a news report about a German Shepherd dog attack.

Most of dog bite fatalities in the United States involve pit bull type dogs and clearly this breed-type is markedly over-represented. In many of these cases it is reported that the dog had never shown any signs of aggression prior to the incident, and the dog “was a good family pet”. My suspicion is that this may not be accurate in many cases. I believe that the majority of these pit bull type dogs who were so-called “good family pets” probably had displayed tendencies for aggression prior to the incident in question, and the signs were ignored by the owners, or possibly not reported because of fear of criminal prosecution.

Obviously, when a well-developed, highly aroused, healthy pit bull type dog attacks a person, particularly a child or an elderly person, serious injury can result. The bite strength in pit bull type dogs combined with their tenacity make this type of dog unique. No data exists, however, about those pit bull attacks that do not result in severe injury to a person, and probably in the majority of pit bull attacks the victim is not severely injured. News reporting services tend to report the incidents that cause severe injury resulting in hospitalization for the victim.

In addition, there is the issue of gender differences. Nearly all the pit bull attacks in which the victim sustains serious injury are inflicted by adult males. Unfortunately, gender differences are usually ignored by lawmakers who promote breed-specific legislation. It is also ignored by authors of websites with strong biases against pit pulls. For example, there is one popular website authored by a lady who discloses that she was previously attacked by a pit bull, and over the course of many years this author has made it her mission to universally condemn the breed. Caution is needed about the validity of the information presented on her website, or any website that universally condemns pit bull type dogs as being inherently dangerous.

Likewise, one must be cautious about anyone who solely places the blame for the dangerous nature of some individuals on the owner. Certainly, there are cases where the owner has acted in a responsible fashion, but still the dog remains dangerous. Genetics is powerful and can readily overcome whatever nurturing an owner may have given the dog. Nevertheless, there are owners, particularly those bent on crime, who favored the breed because many individuals can readily be turned into “killers”. However, not all pit bull type dogs can be turned into killers. For example, take the case of Michael Vick who routinely destroyed those pit bulls who could not be trained to be aggressive fighters.

Given the the above, it would be a mistake to make broad, sweeping generalizations about the breed. Animal behavior science does not warrant such conclusions. Certainly, extremely dangerous pit bull type dogs are kept by owners in residential neighborhoods throughout this country. A pit bull becomes dangerous because of a number of interacting factors such as poor breeding, male gender, intact reproductive status, intentionally training the dog to fight, lack of training and socialization, keeping the dog chained, and the owner’s desire to have an aggressive dog for protection. Generally speaking, for male pit bull type dogs, the margin of error in raising and maintaining this kind of dog is much less than it would be for individuals from most other breeds. Responsible ownership is essential.

It has been said many times but it is worth repeating: Every pit bull must be treated as an individual. The majority of pit bull type dogs make good family pets. The majority of pit bull dogs are not aggressive by nature. In your case, assuming you bring this dog into your household and start living with it, I would be very attentive to the subtle social-communicative signals that the dog displays to you, to people who know the dog, to children and toddlers, to strangers, and to other dogs. Train your dog in obedience, exercise the dog on a regular basis, and socialize your dog as much as possible. Do not chain the dog. Do not engage the dog in any kind of behavior that would encourage aggressive responding. Neuter the dog. Maintain the dog in a secure location. Note that many pit bull attacks are territorial in nature and happen when the dog escapes from the property where it is kept. Negligence like this can easily be avoided. As your dog develops and matures, be observant of subtle behavioral changes, and if these start happening they may be a warning. The assessment done at the animal shelter may not correspond to what your dog will be like in the home environment, particularly with regard to its territorial/protective tendencies.

In short, based on what you say in your correspondence, more likely than not it would be okay to bring this dog into your home, and his companionship should enhance your life tremendously provided that you behave like a responsible owner. Remember, it takes a higher level of owner commitment and responsibility with many pit bull type dogs. This is particularly true if the individual dog comes from a poor breeding line, is of the male gender, has displayed aggression towards people in the past, is encouraged to display aggression through play or protection, left unattended for long hours, is maintained on a chain, and left unneutered and not trained or socialized properly. More so than the vast majority of individuals from most other breeds, a pit bull type dog with some or all of the features from this profile is likely to be unpredictable and a danger to community safety.