People often underestimated the dangers associated with being bitten by a cat. This probably happens because the external damage one sees to the body of a person 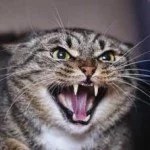 bitten by a cat is much less compared with dog bites. However, judging the potential risk to one’s health based on what the injury looks is risky. Unlike dog bites, because of the needle sharp canine teeth cats have, bacteria from cat saliva can easily become injected deep into the tissue and joints of a person thereby causing infection. Often, signs of infection do not appear until 24-48 hours after the incident. Untreated cat bite wounds may lead to hospitalization.

A study published in the February 2014 issue of the Journal of Hand Surgery buttresses the belief that cat bites pose serious health risks. Medical charts were reviewed for 197 cat bite victims who sustained a bite to the hand. The average age of the victim was 47 years. About 70% of the subjects were female. Most victims were initially prescribed oral antibiotics as the initial treatment, but 14% were unresponsive to this treatment and subsequently required hospitalization because of the onset of serious infection. Three days was the average length of hospital stay. Eight patients required surgery to repair their injuries. The most serious injuries occurred when the joints or wrists of the victim were bitten.

I have served as an animal behavior expert witness in lawsuits where people were seriously injured by a cat. I recall one case in which the victim sustained permanent neurological damage. In another lawsuit, a shopper at a pet store placed her hand into the cage of a cat on display for adoption. There was debate as to whether she was given permission to do this. Nevertheless, the cat latched onto her hand and would not let go. The victim was hospitalized for nearly 2 weeks.

Lawsuits like this are usually difficult to win for plaintiffs because cat owners cannot be held “strictly liable” for the injuries their cat causes to a person. Negligence may be hard to prove in as well, because “leash laws” do not exist, as they do for dogs. In almost all jurisdictions in the United States, cats are allowed to roam free, and on occasion a person may unexpectedly encounter a cat. For example, a cat may wonder into someone’s backyard. If the person acts in a manner which is provocative to the cat, perhaps by scaring the cat or trying to catch or pick it up, then there is a good chance the cat will bite the person. Cats bite people for other reasons, such as predatory attacks (usually in the owner’s home) or when the cat is being petted or groomed (the “petting and biting” syndrome).