Most toddlers  viciously attacked by pit bull type dogs are lucky to survive.  Epidemiological evidence supports this belief: studies have repeatedly found that a disproportional amount of fatalities and severe injuries inflicted by pit type dogs 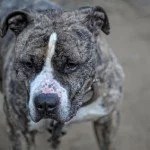 happened to children under five years.

Various authors have speculated about why children are particularly vulnerable to being severely attacked by pit bull type dogs, and reasons include the inability of the young person to defend himself, and possibly because some pit bull dogs may inadequately socialize to toddlers.

A case in point happened in May 2014, when a pit bull type dog broke from his leash and ran into the backyard and attacked a three-year-old who was playing. The dog latched onto the boy and began to shake him, and those who tried to stop the attack had difficulty doing so because the dog would not let go. Finally, after repeating beating by several people who came to rescue the boy, the finally was subdued.  The boy was taken to hospital with over 200 stitches, and fortunately he survived. This attack has several element which characterize many instances of severe attacks on people by pit bulls. Namely, the dog shook the victim and the attack was difficult to stop.

This pit bull may not have been adequately socialization to toddlers, and in addition the dog may have been one that was difficult to control.  Certainlythe dog motivation to attack a child with strong, which suggests that the dog’s ability to socialize with children and toddlers was compromised.