I.  Attitudes and perceptions of dog owners and non-dog owners of pit bull type dogs in California,

Purpose and aims of research:

To determine if differences existed differences in attitudes of people towards dogs of different breeds, particularly referencing to pit bull type dogs.

Data collection consisted of questioning strangers in public settings conducive to data collection (typically fast food restaurants or dog parks). Questioning usually took about 10 minutes. People were questioned about their familiarity with different breeds of dogs, if they currently or previously owned a dog and if so what kind of dog, if they had ever been bitten or attacked by a dog, if they were familiar with the physical appearance of a pit bull type dogs, whether they believed pit bull type dogs are inherently dangerous, their beliefs the why pit bulls are inherently dangerous and it pit bull dogs should be legally regulated.

Differences existed according to geographical location and ethnicity. 50% of respondents in Los Angeles, California felt pit bull dogs were inherently dangerous compared with 35% in Beaver Creek, Colorado and 45% in Rochester, New York;  Results show differences in ethnicity with regard to attitudes towards pit bulls; breakdown according to ethnicity, based on current findings, with regard to the inherently danger nature of pit bulls were as follows: Hispanic 60%; Afro-American 40%; Caucasian 40%; Other 45%. 90% of respondents who had previously owned a pit bull type dog or were a current owner of the pit bull type dog did not feel pit bull type dogs were inherently dangerous. Quite frequently they noted other more dangerous breeds, such as Cane Corsos and German shepherds.

II.  Interactions and reciprocal attention between owners in dogs in dog parks

Purpose and aims of research

Laboratory-based studies have shown that paying attention to humans is an important determinant of dogs’ behavior. This study aimed at characterizing dogs’ and owners’ attention to each other in dog parks in California and Colorado. The the aim in the study was to determine if differences in location influence the dog owner relationship.

Data collection and analysis is still in progress. However, as of January 2017, data has been collected on over 300 ds.  Preliminary results indicate that dogs in California when compared to Colorado dogs are generally more socially attuned and interactive with owners  (74% versus 45%). Owners in California spent more time interacting with their dogs when compared with Colorado owners (80% versus 40%). Labrador retrievers and crossbreed dogs were type of dogs most frequently observed (60% of the total sample to date). Colorado owners were observed with significantly larger dogs (64% vs. 40%) and more pit bull type dogs.  65% of the owners felt that unruly people were more problematic and acted in ways that compromised public safety in dog parks when compared with there canine companions. These results may be explained in terms of owner expectations with regard to the behavior of dogs in the setting of a dog park. Subtle cultural differences in attitudes of Colorado owners versus California owners are also probably present. 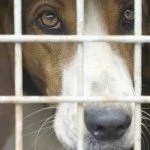 Purpose and aims of research :

Methodology was observational in nature and consisted of a 1/0 time sampling technique in which the dog’s behavior were noted in 60 second intervals in uninterrupted bouts of observations lasting 20 minutes. Only medium-size dogs housed singly were chosen for observation. The observer positioned himself/herself approximately 3 feet in front of the caged dog. Recording was made of the following behaviors and their durations: Direct stare at the observer; Withdrawal from the observer; Approach observer in a friendly manner; Bark at observer; Displacement scratching; Shaking and trembling; Aggressive lunges towards the observer.

As of January 2016, 20 dogs have been observed in Los Angeles and 15 dogs in New York. The majority of dogs observed have been pit bull type dogs. Data analysis will be made when larger samples become available for analysis.