This peer-reviewed article, authored by Dr. Polsky, was published in the December, 1995 issue of Veterinary Medicine. The conclusions drawn in this article and the bases for these conclusions are no different today than what they were nearly 25 years ago.

Small animal practitioners are probably aware of the increasingly popular trend of keeping wolf hybrids as pets. In recent 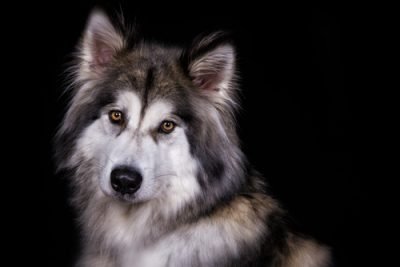 years, the hybrid population has skyrocketed, despite laws that prohibit keeping hybrids as pets or stipulate that they can be kept only if the owner obtains a special permit. Estimates indicate that there are between 300,000 and 1.5 million hybrids in the United States, most being kept as pets. The motivation for keeping these animals as pets differs among owners. Frequently, it stems from the desire for an unusual dog. Some undoubtedly like the challenge of keeping an animal known to be part wolf. There are also those who feel compelled to keep hybrids for humanitarian reasons because of wolves’ status as an endangered species. Regardless of reason, breeders of hybrids have recognized the demand and, as business people, advertise pups for sale by mail-order in trade journals.

Hybrids’ popularity has spurred several publications describing both the positive and negative aspects of these animals. All agree that hybrids are not for everyone. Supporters say that in the right hands, hybrids have the potential to make good pets. Others cogently warn about the dangers of keeping hybrids. Veterinary practitioners, on the other hand, are faced with a different issue; namely, the dilemma of whether or not to vaccinate the animals against rabies. To date, no rabies vaccine has been approved for use in wolf hybrids.

The Humane Society of the United States considers any dog that is part wolf to be a hybrid. Hybrids usually range from 50 to 95% wolf. Wolves are usually crossed with working breeds that look similar to wolves, such as malamutes and huskies. Certain physical traits set hybrids apart from purebred dogs. Hybrids typically have dense hair growth in the external ear canals, they shed heavily from their legs and feet in the summer, they have tufts of hair on their faces, and they have longe bones and narrower chests.

Behaviorally, hybrids differ from dogs because they tend to howl, they carry their heads lower, they move with slinking gaits, and they are extremely adept at escaping from enclosures. They also are difficult to housebreak, they tend to facilitate each other’s behavior quite readily in a group, they are prone to react with aggression when challenged in a dominant manner by an owner, and they seem to be more inquisitive and exploratory.

Like the physical differences that exist between wolves and dogs, the behavioral differences between hybrids and dogs are probably one of degree instead of type. That is, both hybrids and dogs have the potential to display similar types of behavior. Both can become aggressive, both will bury food items, both will explore and hunt, both will problem-solve, etc. What differs between them is the strength of the tendency that a behavior will be displayed, given a particular set of circumstances. As I’ll mention later, this becomes particularly important in reference to the tendency for predation.

I was recently called to serve as an expert witness in litigation involving an attack by a hybrid on a seven year-old girl. The wolf hybrid was a two-year-old female named Timba, who had no prior history of aggressive behavior. She was described as a friendly animal around immediate family members. Timba was neutered and weighed 75 pounds. Papers from the breeder in Alaska estimated her to be about 95% wolf. She was the product of five generations of wolf/hybrid matings. Timba attacked the child while she was riding her bike in the neighborhood where both Timba and the child lived. One key issue that was raised during the trial involved the propensities of hybrids to display predatory aggressive behavior.

The incident unfolded as follows: Timba and a pure bred male malamute escaped from a fenced backyard in which they both were routinely kept. At the time of escape, cape, the owners were not home. Shortly after their escape, Timba and the malamute were observed interacting with two other dogs behind a fence in another yard. A witness saw the victim riding her bike on the street about 30 to 40 ft. from Timba and the malamute. The witness said that the girl’s immediate reaction upon noticing the animals was to turn and try to ride in the opposite direction, and she began screaming. The events that followed are unclear. The plaintiff’s version was that after the girl started screaming and fleeing, Timba and the malamute stalked her, then charged, and then attacked without inhibition. The defense argued that the girl first fell from her bike while she was trying to flee. The animals then approached and explored in a nonaggressive manner. Defense argued that the animals’ exploration of the girl made her scream and thrash out in fear, and this caused Timba (and possibly the malamute) to attack.

Regardless of what initiated the attack, all parties agreed that the girl was very lucky to survive. She sustained multiple bites throughout her body. There was a concentration of the bites on her neck. There was facial scarring. Some witnesses observed Timba shaking the girl as it held her in its mouth. Witnesses also observed Timba hovering over the girl, growling, like a predator guarding its quarry. Timba was eventually deterred by an onlooker who frightened the animal away with a stick. Counsel for the plaintiff argued that the attack was a result of Timba’s predatory tendencies. The defense countered by arguing that the attack happened because Timba became fearful as a result of the child’s defensive actions. The defense also argued that since Timba was five generations removed from pure-wolf stock, she had lost many of her wolflike features. Using this line of reasoning, defense countered that Timba probably did not possess the strong predatory features that characterize wolves.

I was asked to decide if Timba’s behavior was consistent with what one could expect, given the general nature of hybrids. Review of the evidence surely suggested this to be the case. It appeared that the attack happened solely for predatory reasons. What is important to note is that Timba’s actions at the time of the attack – stalking the girl, shaking the girl, hovering over her, and repeatedly biting the neck – are predatory like behaviors universally found in nearly all mammalian predatory species, including wolves. I also felt that Timba, although from the fifth generation, was still markedly wolf-like. Five generations of breeding was probably not enough time to significantly reduce wolfl-like behavioral tendencies. In this case, the rapid retreat of the girl on her bike was probably sufficient to elicit a predatory chase and attack from Timba. The jury believed this line of reasoning and awarded the plaintiff a sizable sum of money. As far as I know, however, this decision has had no impact on the laws regarding hybrids in the Los Angeles area. Moreover, it is noteworthy that a very similar kind of attack by a hybrid on a child has been described in another publication.

What is the nature of hybrids? To understand this, we must first appreciate that hybrids, by definition, are part domestic dog. Because of their breeding, offspring resulting from the cross between a wolf and dog or a wolf and a hybrid are likely to inherit temperamental features common to both. Breeding a dog with a wolf is likely to produce an animal with both doglike and wolf-like behavioral features. Like dogs, hybrids inherit the capacity to become socialized and bond with humans. As such, hybrids are usually less fearful of humans when compared with the typical wary temperament of purebred wolves.

The combination of traits of friendliness to humans with strong predatory inclinations has led some to conclude that hybrids are ”biological time bombs.” Should they be regarded as dangerous animals? This conclusion might be justified considering recent statistics compiled by the U.S. Humane Society. Relative to other breeds of dog, data show an increase in fatal attacks on people by wolf hybrids in the last five years.

However, the percentage of fatal attacks involving Rottweilers and chow chows have also increased. Would it be fair to also conclude that Rottweilers and Chow chows are dangerous animals? Like the tremendous danger an untrained, inadequately socialized, or poorly bred Rottweiler or Chow chow presents, wolf hybrids also present a substantial danger to public safety because of their inherent tendency to display predatory behavior. Anyone should realize that extreme caution is needed when considering a hybrid as a pet. The fact that there has never been a documented attack by a wolf on a person in the wild should not be taken to mean that hybrids are devoid of aggressive behavioral tendencies. On the contrary, place hybrids in an urban environment, where the necessary stimulation to trigger predatory behavior is commonly found (such as joggers or children moving on skateboards or bicycles), and it is likely that predatory behavior will be displayed. An owner of a hybrid should not be lulled into a false sense of security because of the hybrid’s friendly demeanor to family members. Owners should not be led to believe that training and early socialization will be sufficient to reduce a hybrid’s proclivity for predation. Strong predatory tendencies are part of a hybrid’s nature, thereby making it a potentially dangerous animal to keep as a pet in an urban environment.