A Cane Corso fatal dog attack in New York tragically took the life four-year-old boy in May, 2011.  This incident along with other reported severe dog bite attacks by individuals of the Cane Corso breed reinforces the belief that some Cane corsos can be extremely dangerous. 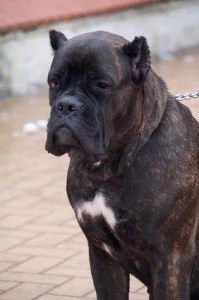 In this particular instance, in this Cane Corso fatal dog attack, the individual was male, and approximately 8 years of age.  The New York Times reported that the incident happened when the victim and his brothers were playing by themselves with the dog in a bedroom.  The mother albeit present in the home, was busy attending to her 10-month-old daughter in a different area of the house.  And after realizing the house was unusually quiet, she walked into the bedroom and saw the dog attacking her son.  The other children were hiding.  The mother could not pull the dog off her son, and she screamed and a neighbor arrived and noticed the dog had a hold of the boy by the neck.  And the dog started acting aggressively to him, and he also backed away.   Shortly thereafter, another person in the apartment building called 911, and when fire fighters arrived they needed to use a Halligan bar force the dog away from the boy.  The dog was tranquilized and eventually euthanized.

Not surprisingly, given the duration of the attack, the boy stained multiple bite wounds on the head and neck.   One witness says the boy’s neck was ripped open. These are the bites that most likely proved fatal.  Fatal dog attack happens because the rapid blood loss from the jugular vein or carotid artery.  Death can happen in a matter of minutes. In this instance, the boy was pronounced dead at Brookdale University Hospital and Medical Center.

The behavioral history of this dog,  the nature of the attack, and the fact that this dog was kept in a small apartment, is consistent with features found in other fatal dog attacks. First, the dog had demonstrated prior aggressive tendencies.  And, according to news reports, this Cane Corso was trained in protection, and the dog reportedly killed the family rabbit.  Moreover, like other fatal dog bite instances, bites inflicted to the neck are usually the type that prove fatal.  And like many fatal and severe attacks, the attack is difficult to stop once it gets started, and redirected aggression is displayed to a person trying to stop the attack.  A video showing redirected aggression by two pit bulls towards people trying to stop an attack is posted elsewhere on this website.

A perplexing issue is this is why the mother left her children unattended with the dog.  Circumstances like this have been presents in other fatal dog attacks, even with dogs as tiny as Pomeranians.  In short, animal behavior expert opinion is that this male Cane Corso should never have been left alone with the kids, even for a minute, and this dog certainly was not the kind of dog for apartment living.  Common sense dictates this but apparently the mother lacked common sense.

Other Cane Corso fatal dog attack are on record. A well publicized occurrence occurred in Michigan in 2014 involving two Cane Corso’s which killed a jogger in a rural area.