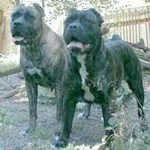 reputation for aggression towards people. Cane Corsos have been disproportionately represented in a number of
fatal dog attacks on people, including a well-publicized incident in which a four-year-old boy lost his life in a Brooklyn, New York apartment in May 2011.

The latest fatal dog attack incident in the United States involving the Cane Corso happened in Michigan on July 23, 2014.  In this incident, two Cane Corso dogs escape from the property where there are being kept and attacked 46-year-old male jogger, Craig  Sytsma of Livonia.  The incident happened in a rural area in Metamora Township, located about 45 miles northwest of Detroit.  A witness to the incident tried to chase the dogs by shooting at them. It is uncertain of how the attack stopped. When police arrived the victim was unconscious and he was taken to hospital where he died shortly thereafter.  Second-degree murder charges were quickly filed by prosecution filed against the the owners, a couple who are both undocumented immigrants.

There appears to be a strong basis for charging the owners with second-degree murder.  For example, newspaper reports indicate that there were at least three instances in which these dogs have either threatened or attacked people prior to the incident involving Sytsma.  Neighbors report that the dogs were frequently loose.  Moreover, animal control authorities apparently knew about some of these past instances.  People in the area who concerned about the dogs feel that if animal control acted proactively about keeping the public protected from these dogs the incident would have been avoided.

Richard Polsky, PhD has served Michigan attorneys as a dog bite expert.  He available for assignment on cases that involve Cane corso dogs.