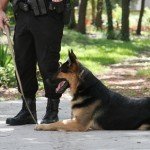 suspect apprehension.  Further evidence supporting my belief of the dangerous nature of these dogs comes from in incident in which a innocent bystander was attacked in February 2015 in Coconut Creek Florida.

The police canine involved in this incident was four-year-old Belgian Melinois named Renzo. The incident happened when his handler, along with several other officers, met at a Dunkin’ Donuts parking lot. Renzo was in the squad car when one of the officers approached to pet him. Renzo lunged at the officer and then, according to news reports, he leaped out of the squad car. His handler tried to stop him by the use of the command signifying inappropriate behavior, but this did not bring Renzo under control. He then attacked the donut shop worker who apparently was present in the vicinity.

Not surprisingly, this was not the first behavioral “mistake” committed by Renzo. In November 2014 there was another incident when Renzo was tracking a suspect and his handler tripped. The handler lost control of Renzo who then attacked a nearby officer, inflicting multiple puncture wounds to the officer’s leg.

Renzo has now been “retired” from service.  Renzo had been in service for 18 months prior to his dismissal/retirement.  The police chief of Coconut Creek should be commended for removing Renzo from service.  Not infrequently, largely because of the high cost and the tremendous effort made by handlers to properly train a police canine for fieldwork, police departments are often reluctant to take a dog out of service. Instead, many police departments choose to keep the dog in service despite what they must know about the danger dogs like Renzo present not only to the public at large but also to the suspects they apprehend.