Pit bull type dogs by far the most common dog found in urban animal shelters in the United States. The reason for the high population numbers in all likelihood stems from the widespread and reckless breeding of pit bull type dogs over the last 30 years.  More so than any type of dog,  pit bulls and their mixes have been grossly mistreated and consequently 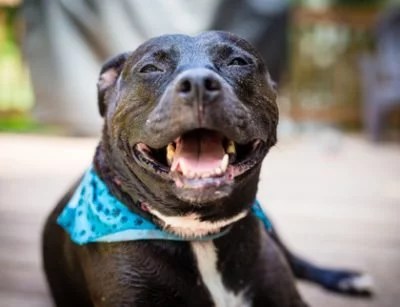 many have been abandoned by irresponsible owners.


Many believe that pit bulls are inherently dangerous and aggressive by nature, despite animal behavior evidence to the contrary.  This belief has been fueled by the massive amount of negative publicity pit bulls have received  in the press.   Hence, largely because of this, when compared with other kinds of dogs, pit bull type dogs are less likely to be adopted by a person seeking a shelter dog. This has had the effect of causing shelter populations of pit bulls  in the United States to remain at consistently high levels.

Are people at greater risk when they choose to adopt a pit bull from an animal shelter? When compared with other type of dogs, are pit bull dogs more likely to inflict dog bite injury to a person, and so be returned, or abandoned by the adoptee after adoption?

This question was addressed by a research team of Canadian animal behaviorists from the University of British Columbia (N. Clarke, R. Ledger, et. al. Aggression, behaviour, and animal care among pit bulls and other dogs adopted from an animal shelter. Animal Welfare, 2011, 2o, 463-468).

In this study, animal behavior and dog bite data were collected on the behavior of two groups of dogs after their adoption from an animal shelter. The first group consisted of 40 pit bulls, and the second group consisted of 42 similar size dogs of other breeds. Only dogs that were kept by the adopter for at least two months were included in the study.

Results were as follows:

In sum, this study demonstrated that, when compared with other breeds post-adoption, pit bull type dogs were not any more aggressive, and there was no difference in how they were cared for by their owners. Contrary to what many believe, these results suggest that pit bulls may not present an increased risk for problematic behavior after adoption when compared with other types of dog. The findings may not generalize to other populations of pit bull dogs adopted from different animal shelters in the United States.

Why the positive findings here?  The results could be explained in the terms of behavioral scrutiny they may have received from shelter personnel prior to adoption. Namely, this particular population of pit bulls, as well as those dogs in the control group, probably were subjected to rigorous behavioral testing to screen out potentially problematic dogs.  This is routinely done at well run animal shelters. Hence, those dogs that did not pass the behavioral test therefore were not put up for adoption, thus leaving a biased sample dogs for adoption.  Also, another consideration is that those dogs identified as pit pulls, may not have been genotypically similar to a purebred pit bull Terrier.  Proper breed identification based on  physical characteristics may be problematic.

The good news is that given the advancements in animal behavior science, particularly with regard to the development of behavioral testing protocols, most shelters are now much more capable of accurately matching dog with owner.  This is critical for successful adoptions.

Nonetheless,  sometimes things go wrong post adoption. For example, an adopted dog may bite a person after being placed in its new home.  When this happens, careful scrutiny of the circumstances need to be made in order to determine why the incident happened before concluding the dog is not suitable for adoption.  One needs to determine whether the incident happened because the dog was provoked in some fashion.

If a shelter fails to consider the behavioral history of the dog prior to adoption, or if they use  improper behavioral testing techniques, then problems may arise.  Animal shelters and humane societies obviously assume substantial risk because in essence they are in the business of trying to save the lives of countless number of abandoned dogs.  The humanitarian contributions these organizations, as well as the score of smaller adoption agencies, make to society is immeasurable.  Nonetheless, they have the responsibility to ensure that the dogs they re-home have non-aggressive temperaments and are free from foreseeable behavioral problems.

In this regard, it would be interested to determine how many dog bites, and to whom, are inflicted by dogs derived from animal shelters vs. other sources, such as breeders.  I know of no research findings that address this question.

In conclusion, the study reported above shows that most pit bull type dogs can probably be safely adopted into  a new home environment, but only after the shelter thoroughly makes themselves aware, as much It is feasibly possible, about the behavioral tendencies in the dog.  Placing the dog with responsible and compassionate owners, and in the proper environment, both physical and social, it’s essential.