Groups of dogs  (often referred to as a  “pack” of dogs) have frequently been implicated in fatal attacks on humans. In one case in  Philadelphia that occurred in the early eighties, a group of five household dogs ganged up and and mauled to death a 81 y.o. invalid lady. 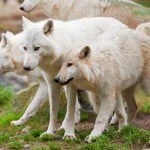 Animal behaviorist, Victoria Voith, DVM an investigator on the case tested the dogs for their temperament. A striking finding that when the dogs were tested alone, each was non-aggressive; however, when placed back into their “pack”, collectively they became very aggressive towards people.

Read more about the danger of dog packs