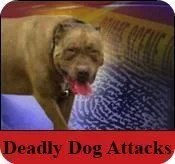 usually those who possess limited abilities to defend themselves against a powerful, aggressive  dog.  Victims are usually the very young, elderly people, or those who are disabled.   Pit bull type dogs have been implicated in a disproportional number of fatal dog attacks.  Other consistent findings show that most fatal dog attacks occur in or near the dog’s territory, and usually by a dog who is unrestrained

Unfortunately, no successful methods have been proposed or implemented to curtail the number of fatal dog attacks. Breed-specific legislation apparently has had no discernible effect in reducing the number of fatal dog attacks. Likewise, other measures such as the compulsory neutering of pit bull type dogs and educational efforts designed to enhance owner responsibility have not had much impact.  Further, setting example through well-publicized criminal prosecutions apparently has have little effect on reducing the number of dog bite fatalities that occur each year in the United States.

Given the above, the frequency of dog bite fatalities in the United States has stayed consistent in recent years. The numbers are as follows:

Moving forward into 2015, it is likely that about another 30-40 people, mostly children, will tragically be killed by dogs. And most fatal dog attacks in the United States are likely to occur in Texas.

From this writer’s perspective, the approach of teaching owner responsibility appears to be the most viable approach to lessening the problem. Dog owners need to be made aware that certain factors, working together, may put their dog at risk to kill a person. the most significant factors are as follows:

Past behavior of the dog: In the majority of instances, investigation have shown that the dog(s) involved has displayed signs of aggression towards people prior to the incident in question. However, there have been a number of fatal dog attacks in the United States in which the owners claim ignorance regarding previous aggressive behavior in their dog.  In some cases this may be true but in other instances such ignorance may stem from an owner’s failure to recognize subtle signs of aggression, or possibly their flat-out denial that their dog could possibly kill a person.

Owner’s Presence: In almost all instances, the owner of the dog is not present when the attack occurs. This is understandable given that many fatal dog attacks happen after the dog escapes from the owner’s property, almost always without the owner’s knowledge.  In another instance, the owner chained his pitbull on his front lawn and then took a nap. A neighbor’s three-year-old toddler wandered over to interact with the dog and was attacked and killed.

Size: Medium to large size dogs are usually involved but note that in one instance in Los Angeles a Pomeranian killed an infant in a bassinet.

Sex and reproductive status: In the majority of cases male dogs are involved and usually these dogs have not been neutered.

Circumstances: circumstances frequently associated with fatal dog attacks involve a dog who was chained, a dog who broken free from the property in which it was kept, or a group of dogs running loose in an urban or rural setting.

Victim: Usually a defenseless person such as a child or someone who is elderly.

Based on the above, a high risk situation exists for a dog bite fatality when the following scenario is present:

A pair of reproductively intact adult male pit bull type dogs, who have previously displayed aggression towards people near their territory, escape from the property where they are being kept and encounter a nearby child or elderly person.

Additional information about fatal dog attacks in United States can be found elsewhere on this website.