It is rare that one reads about a Fila Brasileiro fatal dog attack. The likely reason is simple: the 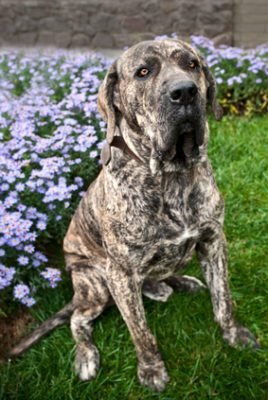 breed is not that popular. Unlike other more popular docile mastiff breeds, such as the old English mastiff, many potential owners probably shy away from Fila Brasileiro ownership because of reputation the breed has for its heightened aggressive tendencies.

Also known as the Brazilian mastiff, individuals by any standard are gigantic in size; males weigh as much as 180 pounds, and when adult may stand as high as 28-30 inches. The breed was developed in Brazil for protection. And at one point these dogs were used to return slaves unharmed to slave masters. The breed has also been used for tracking, and in this regard may rival the the abilities of bloodhounds to track down criminals.

However, the breed is best known for its superior guarding and protective tendencies. The massive size of this breed has the potential of making some individuals extremely dangerous. Coupled with this, Fila Brasileiros have been characterized as being wary of strangers, and in certain circumstances this factor promote aggressive behavior.

Given the above, it is not surprising that breed-specific legislation has been implemented regulating ownership of the Fila Brasileiro in the United Kingdom, Israel, Denmark Norway, Malta, Cyprus, Australia, and New Zealand. As of this date, the breed is recognized officially only in Europe. The Flia Brasileiro is not recognized by the largest kennel clubs in the United States, the United Kennel Club and the American Kennel Club.

Did the victim die because of Fila Brasileiro fatal dog attack?

Whether a Fila Brasileiro fatal dog bite occurred in Hamilton, Ontario in January, 2016 is the subject of debate. Officials could find no conclusive evidence suggesting that the aggressive actions of the dog in question, a male Filia Brasileiro x Shar-pei mix, killed the man. However, witness accounts contradict this conclusion.

According to news reports the dog attacked a man who was walking on foot in a residential neighborhood. According to witness reports, the attack was persistent and those who try to intervene could not stop the attack. A neighbor attempted to intervene using a baseball bat. And according to a new source this witness stated: “It just looked like, for whatever reason, he was gonna take out that guy and that was it. And there was no stopping.”

From an animal behavior perspective, a Fila Brasileiro needs to be trained from an early age, socialize properly, and obtained from an established breeding line that emphasizes temperament rather than appearance. This is particularly true for males. And a breed like this only belongs in the hands of an experienced dog owner! And unlike a typical docile golden retriever where an owner may be afforded a large margin of error in the management of a dog, the owner of a Filio Brasiliero cannot afford to make many behavioral mistakes in raising or maintaining a dog of this type. Behavioral mistakes may result in unprovoked attacks on people or possibly a fatal dog attack, such as the one reported in this story.

Last, it is important to realize that not all Filia Brasileiros are dangerous by nature. Like other so-called dangerous breeds, the degree of danger to public safety any individual Fila Brasileiro presents must be weighed by several interacting factors, which include the temperament of the dog, the behavioral history and genetic background of the dog, and the control an owner maintains over the dog in different contexts.

Dog bite expert, Richard Polsky, PhD, is available for assignment from personal injury attorneys handling dog bite cases. He has testified in court about the dangerous proclivities of various mastiff breeds, including the Cane corso and Presa canario. Attorneys should contact Dr. Polsky to discuss the possibilities of using his expert services in a dog bite lawsuit.