The Italian mastiff, better known as the Cane Corso, first came to the attention of many when a pair of Cane Corsos fatally attacked a jogger in Michigan in 2014.  Like most other mastiffs, Cane Corsos are huge (a fully developed adult male weighs about 160 lbs.).  The breed was initially developed for guarding and protection.  Cane Corsos have been implicated in several other fatal dog attacks in the United States, as reported elsewhere on this website.  Not surprisingly, the breed has gained a reputation for being inherently dangerous. However, unlike other mastiff 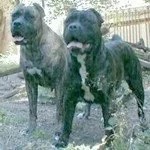 dogs, such as the Dogo argentino and Presa canario, the Cane Corso has been subjected to very little breed specific legislation.

Another vicious but fortunately non-fatal dog attacked by two Italian mastiffs nearly took the life of a lady in Richmond, Virginia on  April 8, 2016.  Fifty-eight year old Teresa Key was lucky to survive. She was hospitalized after losing part of her scalp and she sustained dog bite injuries to her arms, legs, back and ears.

Details of how this harrowing attack started are sketchy but it occurred during her walk to work.  According to one online news report, a man in his car try to stop the attack by honking this horn. This technique did not work.  Animal control authorities arrived shortly thereafter and the dogs became aggressive to them. One dog was shot and killed and the other dog captured. It is likely that the dogs lived nearby given that their reaction was probably territorial in nature.  I note that the same scenario unfolded in another incident in which I was retained as a dog bite expert.  In this lawsuit, two Cane Corsos escaped from the yard in which they were kept and mauled an elderly lady walking on the sidewalk. This lady was lucky to survive.  Neighbors who came to her aid also had trouble in stopping the attack.  In this lawsuit action was filed against Orange County Animal Control in southern California for negligence. Plaintiff’s counsel believed that animal control knew about the dangerous nature of these Cane Corso dogs but failed to take appropriate action to protect public safety.

I believe some Cane Corsos have fallen into the hands of owners desiring large, powerful, protective dog with aggressive tendencies.  Some of the Cane Corso treated in my animal behavior therapy practice in Los Angeles have been manageable and good with family members including children.  On the other hand, I have had cases where some individuals, mostly intact and insufficiently socialized males, have been vicious.  In most cases, the vicious tendencies of these dogs were directed to strangers near the dog’s territory and not family members.  I believe the vast majority of Cane Corsos have the potential to make great family pets.  Cane corsos have the potential to become a welcomed member to any community.  Nonetheless, when placed in the hands of an irresponsible owner, an individual can easily become ruined.  Individuals must be properly nurtured and responsibly managed.  It is also important that individuals be obtained from a reputable Cane Corso breeder.  Generally, dogs belonging to this breed should only be placed in the hands of a responsible and experienced dog owner.