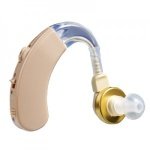 The case in question was an attack on and 86-year-old lady whose hearing aid fell from her ear hitting the ground, as she stooped over to attach the leash to her mixed daschund, Samie. When a hearing aid hit ground, it started beeping with an amplified high-pitched shrill sound, and immediately thereafter, the dog who was in her proximity, attacked. Daschunds show more different types of aggression to people when compared with other breeds.

Although rather unusual for hearing aids, high pitched shrill sounds are believed to have been associated with other instances of dog attacks on humans, because it is believed that they mimicked the sounds of prey species, such as rodents. In fact, this may be behind several documented dog bite fatalities in which the dog has attacked an infant in a crib who may have been playing with some sort of toy that squeaks.

Hearing aid specialists say that he had never heard of an instance like the one described above, however.