The French mastiff (Dogue De Bordeaux) is a huge dog, typical of all mastiff-type dogs.  Individuals can weigh as much as 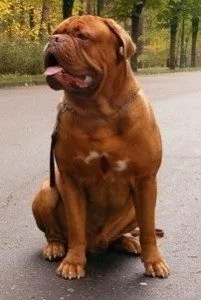 175 lbs. and stand about 28 inches at the shoulders.  Coupled their large size and genetic endowment (developed for protection like most other mastiff breeds) it is somewhat surprising that there has not been more news stories about vicious dog bite attacks on people by French mastiffs.

Hence, I read with interest a recent new story about a vicious attack by a French mastiff and left a three-year-old boy hospitalized in Birmingham, England. The incident was reported online in the English newspaper The Mirror on April 2, 2015 (http://www.mirror.co.uk/news/uk-news).

According to the news story, the incident happened after the dog escaped from its kennel.  Both the boy and his grandmother were attacked. Other circumstances are not known, however.  It was not reported how the attack stopped.  The child suffered a broken leg, puncture wounds and lacerations to his face and body.  The injuries to the grandmother apparently were not as extensive, but like her grandson she was also hospitalized.

One wonders why the owner of this French mastiff was arrested?  Here’s the catch: The Dangerous Dog Act specifies four specific breeds, but in effect the law is not limited to these breeds because other dogs that that physically resemble any one of these four breeds can also be included!  Hence, in England, according to the way the law is written, any breed of dog can be classified as “dangerous” if they possess certain physical attributes.  In short, a dog may be deemed dangerous according to its physical appearance and not necessarily according to its breed composition.  This obviously widens the scope of the various mastiff breeds that can be declared dangerous.  However, from my perspective, just on looks alone, a well-bred French mastiff has an entirely different look when compared with a Dogo Argentino or a Brazilian mastiff. Some may remember the slobbery French mastiff who starred with Tom Hanks in the 1989 movie “Turner and Hooch”.

Animal behavior science tells us that there are myriad of complex, interacting reasons why dogs attack people.  One of these includes a dog’s inherent protective tendencies, a trait common to the mastiff breed. Mastiffs, whether their origin is in Spain (Presa canario), France (Dogue De Bordeaux), Italy (Dogo Argentino), Brazil (Fila Brasilerio), England (English mastiff), or South Africa (Boerboel) all have been historically bred for protection, and breeders continue to favor this trait.  Previously I wrote about the increase in attacks on people, particularly children, by the Boerboel.  Nonetheless, it is important to realize that just because a mastiff has inherent protective tendencies, this doesn’t necessarily mean that it is at risk to inflict dog bite injury to people.
_____