Previously on dogexpert.com, I have written about the inherently dangerous nature of police K-9s and how police dog attacks on criminal suspects usually cause greater bodily injury when compared with dog bite injuries inflicted by nearly all breeds of domestic dog, including the pit bull terrier. 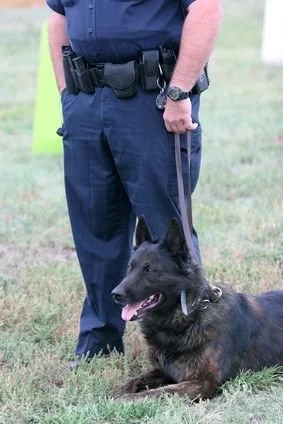 On the other hand, unlike pit bulls, police canines rarely kill suspects. In fact, police K-9s used for suspect apprehension have been deemed a nonlethal force in several appellate court decisions. One reason for this is because the dog attack on a suspect as always happens in the presence of the handler; hence, the handler is able to stop the attack albeit often with difficulty. Moreover, on occasion, when a police K-9 is commanded to attack a suspect, the handler may intentionally delay intervention, and this usually leads to excessive dog bite injury to the suspect. This, in turn, raises questions about excessive force and whether the handler had sufficient control over the dog.

Another reason for the rarity of fatalities caused by police K-9s is because these dogs are intentionally trained to attack the extremities of a person. In contrast, for example, dog bite fatalities involving pit bulls, the person is killed because of bites to the neck which causes suffocation through the crushing of the trachea, or through rapid blood loss because of damage to the jugular vein or carotid artery. Moreover, in fatal dog attacks the victim is usually alone, therefore human assistance is typically not available to stop the attack.

Much has been written about the dangerous and unpredictable nature of attack-trained police K-9s on this website. Another incident confirming this belief happened during an apprehension in Sault Ste. Marie, Ontario in June 2008. In this instance, an 85 lb. police K-9 attacked the wrong part of the suspect’s body. In this case, the dog attacked the throat of the suspect, causing severe damage to his vocal cords and a crushed larynx.  If the handlers were not nearby when the attack happened then surely the victim would have been killed. According to testimony in this matter, the suspect was apprehended when he was hiding in bushes. Not surprisingly, the dog found the suspect. The dog was deployed to the scene because of reports of individuals going through cars. The handler of the dog testified that the attack on the man’s throat was “unpreventable”.

Discovery in this case also revealed that this individual K-9 had a history of biting suspects on previous deployments. The fact that the bite/deployment ratio may have been high for this particular dog indicates a number of possibilities: the unreliability of the dog for field work, or that the dog was not sufficiently trained to limit its attacks to the extremities of the suspect. the training records of the dog need to be reviewed to see how proficient the dog was in limiting its bites to the extremities of a person. In lawsuits like this, it is important to review the training logs of the dog to determine the dog’s “error rate” in the various kinds of training scenarios to which it was subjected. Some police handlers may deploy their canines in a field situation knowing that their dogs are not proficient in certain tasks, such as suspect apprehension, and this increases the danger the dog presents to both suspects and innocent bystanders.ead more about the dangerous and unpredictable nature of attack-trained police K-9s