Police canines used for suspect apprehension in the United States are bred from highly developed breeding lines.  The majority of these dogs are imported from countries in Europe, particularly the Netherlands and Germany.  Their breeders usually start training dogs earmarked for police work at a very early age.  Subsequently, after these dogs are purchased by police departments, the training continues usually with a single, designated handler.  In 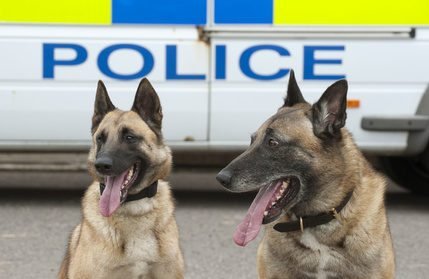 most cases the handler raises, trains and socializes their “canine partner” so that it will be reliable and trustworthy in all contexts all the time, but particularly when they are deployed in field situations for suspect apprehension.

Canine police dogs used for suspect apprehension are most often trained in the apprehension technique known as “bite-and- hold.”  This technique teaches the dog to attack a suspect, either on their own initiative or by command, and hold the suspect until the suspect is handcuffed by its handler or other officers who may be present.

Many hours of training are needed to train a police K-9 to behave reliably in a field situation using the bite-and-hold technique. Canine handlers are required to keep logs of the dog’s performance, noting successes and errors in the various skills the dog are required to master (e.g. obedience, recall, tracking) both during formal training sessions and when the dog is deployed in the field.

When deployed in the field for subject apprehension police departments have protocols which handlers must follow. For example, they must announce the presence of the police dog to civilians in the area, and a suspect they are about the apprehend must be told that the dog will be released unless surrender is forthcoming. Moreover, guidelines must be followed by the handler in determining whether the circumstances present justify the deployment of the police canine (that is, justification for use of this kind of force).

There have been numerous occasions in which police canines have effectively apprehend suspects with the bite-and-hold technique.  One cannot downplay the significance of the attack trained police K-9 in field situations which at times the life of a police officer may be in danger.  Nevertheless, their value in this regard carries risk.  From my perspective in animal behavior, there are serious risks to using the bite-and-hold technique for suspect apprehension. Some of the risks of are as follows:

The above mentioned risks are understandable given the nature of canine aggression using the perspective of animal behavior science. That is, if is simply impossible to train this kind of dog to reliably start and stop an attack upon command, and to inhibit its aggressive tendencies in certain circumstances.  Many of these dogs become extremely aroused when they are brought into the field, and this state of arousal may cause a handler to lose control of their dog.  These dogs come into field situations with strong motivations to attack, and they welcome the opportunity to do so. From the dog’s perspective, it has a “job to get done.”

The kind of force discussed in this article, that coming from an attack trained police K-9, can easily be misused by the handler. No matter how well trained the dog is or how experienced the handler, considerable risk always exists in that the handler will lose control of the dog, thereby making it foreseeable in certain circumstances that the dog will attack a non-suspect, or that handler will be unable to quickly stop the attack by verbal command once the attack has started. The nature of canine aggression makes the above-mentioned risks inherent, and public safety will be compromised until police departments take meaningful steps to reduce the danger these dogs present when deployed in the field.